Jeff Scharver was a unique person, with an electric personality. He was always wired for doing something fun and always engaged those around him in a spirited way. That was Jeff, he embodied life and was one of those people you meet every once in awhile that you say, he/she’s got a great life ahead of them. I suppose I never worried about how his life would turn out, a military and distinguished career, a happy wife and family filled with children. He didn’t get high on drugs, but high on life, and really set a great example for all those who knew him. When you look at that photo of him, look deeper and you’ll see exactly what I am talking about. That isn’t a casual smile, that’s a smile that is fully engaged in the spirit of life. 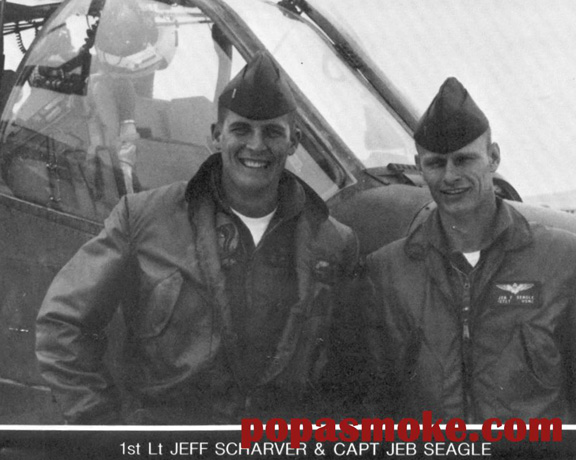 1st Lt. Jeff Scharver (left) and his classmate and co-pilot Seagle of the other Cobra. Photo courtesy of Martha Carson

In 2010 I ran into this guy (via online discussions) who flies the Apache 64 for the US and is currently serving overseas in Iraq.  It reminded me of a friend I knew in college who was in ROTC and later became a helicopter pilot.  At the time in 1983-4 I had gone off to Harvard University and he had already left for pilot school, and basically a new life. About a year later I found out that he was shot down in the Grenada invasion and had been dead for some time.

When I heard this I of course wanted to know what had happened, the details.  What I was told is he had become a huey pilot or was learning to fly them.  I had heard of an incident during the invasion where a couple of huey’s had collided and many were killed, and not knowing anything else assumed he might of been in this mess.  But because of this Apache 64 guy I decided to try another internet search for information… understand that the Grenada invasion took place in 1983, over 25 years ago.  What I found was that people started posting about the facts around 2005, and more info in 2007.  It’s a testament to this particular story that people in the military especially are still recounting the event.

I’ll give you some brief details about the story, but will later elaborate because I think the story is remarkable and worth sharing.

What Happened: Navy Seals were sent in on the ground to secure an individual who had potential to become Grenada’s new leader.  It turned out to be a trap and the Seals were in grave danger, being confronted by armor and running out of ammo.  Cobra’s were sent in.  My buddy, Jeff Scharver was a co-pilot in one chopper and his classmate Seagle, a co-pilot, was in the other Cobra.

The area is under intense Anti Air fire ( triple-a or AAA.)  There are at least two batteries and other guns trained on the two Cobras.  Seagle’s Cobra is hit and goes down.  The pilot, Howard is severely wounded (he lands the damaged Cobra with his only remaining left hand, he fully survives)… Seagle pulling him to safety while under small arms fire, from the burning wreck.

Howard thinking he’s done for tells Seagle to save himself, even trying to shoot himself to end the discussion.  Seagle takes the pistol and does go for help but is captured and executed.  Meanwhile my buddy Jeff Scharver is overhead doing runs to keep ground troops off of Howard who’s laying in a soccer field.  They try to take out the AAA, until a rescue chopper can arrive… but their Cobra runs out of ammo.  Undeterred, they continue to fly over the AAA guns to draw their fire away from the rescue chopper who picks up Howard and waits on the ground for Seagle who obviously never shows up.  As you can guess, Scharver’s Cobra gets shot down and both he and the pilot are killed.

I’m sure that Scharver wasn’t going to leave the area, especially with his buddy on the ground, I’m sure the pilot felt the same way.  But I think it’s amazing that they were willing to fly overhead, knowing how serious the situation was on the ground, without any ammo.

I’ve found some photos, including the moment when his chopper hits the water.  I think the photo was probably taken by the cubans, perhaps the one’s manning the AAA gun. It’s a great story and shows that he was a real hero in saving Howard’s life.

It’s amazing that someone took this picture the moment Scharver’s cobra hit the water.  I suspect the photographer might of been a Cuban.  As you can see it was published somewhere, the caption in English.

for anyone who’s lost someone they know, it’s good to see an image of the event versus letting one’s imagination try to fill in the details.  It’s pretty strange for me, that after all this time I finally know what happened to a great guy.  For those who knew him better, I wonder if they know what really happened and what he did that day, his first day of action in combat.