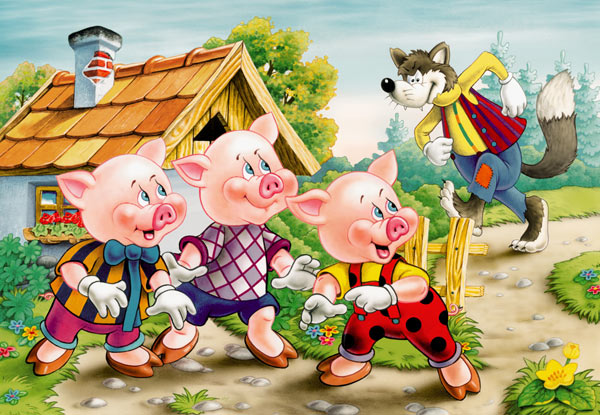 The wolf is our ever threatening weather.
The pigs, as intelligent as they are, are us. People do not always act as wise as we should. So what is the issue then? Why do our houses keep blowing over?
Those 3 little pigs, all with different attitudes.  One was especially lazy, the other felt he was reasonable, the last understood the problem and took action.  All little piggies are not made the same as express by how they think, not because of how they look, what they know, or what they know they should do.
What if I were to say “I’ll design you a house that will stand up to most weather, but with some weather the house will collapse on top of you and could kill you and your family, okay?” You’d probably think I was nuts and would think of my proposal as completely crazy.
But perhaps you’re the crazy one, as we all know houses are constantly flattened by tornadoes and high winds. Do you really find this acceptable? I don’t. There’s no reason why houses should be built in a way that is inherently vulnerable to high winds, ever. You don’t see high-rises falling over do you? So why should your house get blown away?  By understanding the environment in which one lives, like if you live in tornado alley, you should live in a certain type of structure that offers the kind of basic functionality that ensures you are safe year around.  Makes sense right?  Except to the lazy cheap piggy. That piggy doesn’t care about you, he just wants your money.
We are so conditioned to accept a certain type of house as being ‘generally acceptable form of housing’ we never question it’s reliability or integrity. The truth is, these stick built houses are not reliable, not against weather and rarely against heat loss or other mechanical and functional needs. Often the life span of the house itself is just a few decades with portions being obsolete within a short 10 years like the roofing system.
It’s called taking shortcuts as determined by economic factors. The pendulum swing on this attitude has gotten so extreme that often new homes start falling apart within a year of construction.  Besides potential incompetence of the Contractor and Developer, rising costs, shorter schedules and squeeze the Contractor from performing the right job and instead opt to superficially finish a project in order to collect the money and run to the next job.
Another factor is our work/living dialogue, that one use to live and work relatively close. Now with the automobile work can be further away and often requiring one to move to a new city. This puts a strain on the concept of building a more permanent home considering its investment and instead opt for a more temporary living condition predicated on a smaller investment.  This has a very unfortunate consequence in that communities echo the lack of quality or care resulting in the degradation of empathy for one’s living circumstance.  Instead of us opting for a more European hill town where the town is concentrated we have found ourselves in a circumstance where people want less contract and their own private door, yard, fence and other barriers to keep those we don’t know, our neighbors, at bay, and that’s just sad.
It’s no wonder the result for some is an obsession with guns, with ideologies that lean towards the extreme and rash outbursts that result in tragedies.  Often the individual ‘defending their turf’ when the turf itself is little more than broken up roads and sidewalks, chainlink fences and dust blowing around.
Article Image: http://www.cosmickids.com/classplans/three-little-pigs-kids-yoga-story-class-plan/