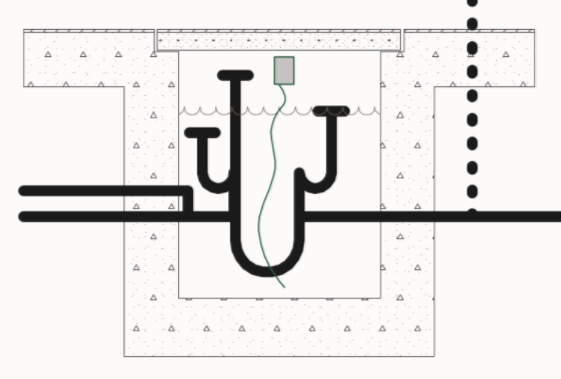 We are proud to have developed a simple pipe system that prevents basement and cellar flooding due to a blockage in the house trap.  It’s a rather simple system that for a couple hundred dollars can spare a homeowner from thousands of dollars in damages, including sparing them from the week or so to make their flooded area ‘sewer free’ which is not an easy task and often leaves residue behind despite the best efforts. YUCK!

There is a clog in your house trap, that curved U-shape part of the pipe that serves to hold water so that sewer gasses do not enter the home, and to discourage rodents from running up the pipe into your home… so a very useful thing to have, but that clog is quickly causing the pipe running under your home to fill with rainwater from a downpour.  As the rain water fills the pipe it starts coming out of the floor drain, the bathtub drain, the toilet or even the sink, yuck.  The only thing you can do, if you even notice the flood starting to happen, is cut off the water source by running outside and disconnecting the downspout.

Yet this damage can be prevented.  By creating a pit to hold a couple extra traps, one trap to allow the flooded water to escape into the pit, and a slightly higher drain with it’s own trap to bypass the house trap and allow the water to continue on its way to the storm and/or sewer drainage system.  No more flood, and with a little water alarm you’re alerted to the problem which can be corrected after it stops raining.

To keep this basement apartment flood free, let’s talk sewage overflow. Yikes! Resolved by a simple detail that can prevent thousands of dollars in water damage to any home.

One of the HomeOwner’s worst nightmares is flooding caused by a blockage in their house trap. The trap’s purpose is to keep sewage smells from entering the home, creating a physical barrier with water. Yet this same trap can get clogged, with ‘flushable wipes’ or other items and can result in a backup of water. In NYC often the sewer line is connected to the storm drainage system which compounds the problem by overwhelming the drainage system with too much water that backs up along the pipes because of a blockage, until it finds an exit point.

We have resolved this issue, by adding a floor drain on the house side of the trap, so that flood water can exit into a pit (rather than overflowing the toilet or bathtub) and another drain at a slightly higher elevation (so that exiting water is less likely to splash) to drain the water from the pit, thus keeping the flood confined to the pit.

A simple water alarm alerts residents that there is a blockage in the house trap.

The alternative? Sewage on your lower level floor, being absorbed into your walls, behind the walls, into wood studs, furniture and everything it touches. That condition often requires removing everything that has touched the sewage meaning that wall board has to be cut away, furniture has to have their base modified (cut and replaced) or thrown out with rugs, toys and whatever else. Then the entire room needs a 3+ day dehumidification in order to prevent mold. Yes, all that equals a nightmare.

Our simple solution prevents all this, with a couple extra floor drains, a backflow preventer, a simple battery operated water alarm (usually available at your local hardware) can avoid the mess and ugliness of a rain water and sewage mess. And if you noticed, we placed the clean out cap above both drains, so that one can unscrew it and snake the trap without getting one’s hands wet.

This detail is a SimpleTwig Architecture first, and is being applied to all our projects.

Note that eventually the water in the two extra traps will evaporate, so periodically they will need to be refilled.