If you’ve been following this series on the Afghan Cultural Center, you have to admit that over these 2 1/2 years of posting one image per month, we created a lot of images.  The design, digital model and renderings were all created in 1 month.  What you really don’t see much is the topography, existing buildings and topographic map we created as most of these elements were blended away during the presentation of this competition.

Over the years I’ve entered a few competitions here and there, but of the last three I’ve entered each winning entry proposed a scheme that was underground.  While I can respect this approach as one which can preserve the dynamics of the landscape, I must also question the notion of humans living underground and for such a public building.  Personally, for this competition, I think it might of been the result of fear, that in order to remain safe it would be better to not be seen.  I obviously took the other direction, that not only is it important to be seen, but to stand tall, surrounded by us humans to create a wall against those who would bully us and to take back our land for the sake of good.

The winning scheme reminds me of the rise of castle architecture, and how eventually larger windows were added as a reflection of their society and the feeling of safety.  Lets hope the future does not involve having humans living underground.

Well without further delay, here’s the last image and description.  Thanks for following this series and we, both Basia and myself, Nick Buccalo, hope you’ve enjoyed getting a glimpse into the making of Architecture.

A combination of reinforced concrete, mud brick and stucco makes up the structures of this project.

Situated on reinforced concrete footings, foundations and slabs will be built mud brick walls. Some of these mud brick walls, like in the academic and administrative wing, will have cavities to accommodate reinforced columns, thus acting as permanent forms. The mud brick will be enclosed in a wire grid mesh to give it stability during earthquakes and tie it to the reinforced concrete structure. Using mud brick also directly employs local workers and manufacturers, and thus creates a cultural center that is built by the people. Once the reinforced columns are in place, additional reinforced concrete is poured for capping beams, parapets and roofs to completely tie the entire structure together. The resulting overall mass will yield moderate interior temperatures year around. This construction method will reinforce the sense of ownership by the Bamiyan people, and as such will serve all well. 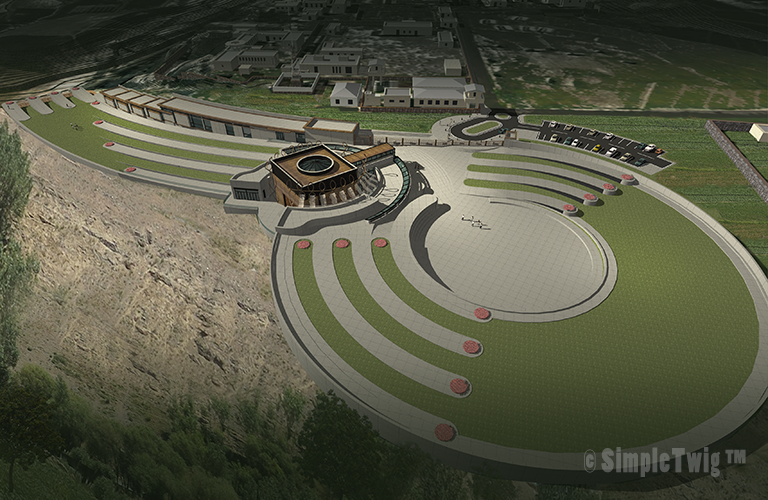 Critical Analysis: It has come to our attention through looking at many competitions and the winning schemes, that there is more and more a preference for ‘underground solutions.’  That is, schemes that put everything underground leaving the ground plane without any indication, or very little indication of anything happening on the site.

Some examples are this competition and the winning entry, or the World Trade Tower Competition, or even the Vietnam Memorial winning competition entry which is a shallow ‘v’ that carries the visitor below grade level.  Often this approach is very effective and appropriate as in the Vietnam proposal, but in the case of the Afghan Cultural Center I believe it reflects the fear of what might happen if a structure is seen throughout the valley and how it might become a beacon and symbol for terrorists to attack.

Clearly our solution lies somewhere between, that reflecting the hopes of the people it begins to rise upward yet is blanketed on most sides by an embracing form.

I can look at our scheme and say the imposition of our landscaping approach, one to offer a safe place to gather for the residents of the valley below during cultural events, may have been too much for such a place as this Afghan area to deal with, and in that way we could have toned it down, but the musical reference of the forms was for us to powerful a symbol to turn away from, in that music often brings people together to celebrate the more positive things of life.  And too the interlocking fingers of a variety of people we believe it’s symbolism lost or not appreciated enough to warrant such a large manifestation.

Still, while some structures would be deemed interesting if put fully underground, here I believe it is inappropriate and cowering.  I believe people should stand up and been seen and heard.  And in response to any terrorist attack I made this district completely impenetrable on all sides, a feature which could easily be not seen when viewing hundreds of submissions.

Thank you for following our articles regarding our submission for this competition.  To see the winning entry go to http://bamiyanculturalcentre.org and click on News.  Let us know what you think of our entry compared to those who won an award, we’d love to hear what you think.