Below is an image of Volterra, Italy, one might call a typical Italian hill town.  Why take note?  It represents a unified composition.  When an artist makes a painting or sculpture, they are making a unified composition, and thing that relates in all it’s parts to one another.  When a building is designed, it too typically relates to itself in a unified composition.  But what we see more and more in America is a lack of acknowledgement with the overall composition of the place of a building.  This leads to a dysfunctional composition, one in which all the parts are independent and calling for attention leading to the result that no part gets any attention because together, as a composition, it is too much for the human to fully comprehend quickly.  With time one can navigate, but unlike the village above people will be less likely to ‘hang out’ and enjoy.  “Get in, get my stuff, and get the hell out, back to my ‘insulated from the world vehicle’ and back to the controlled environment of my dwelling,” is what comes to my mind. 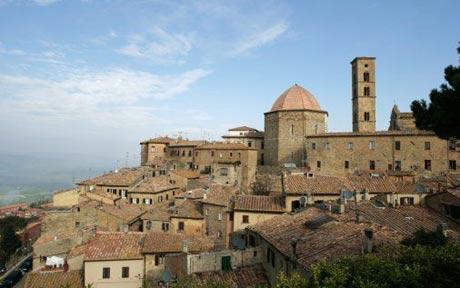 In the 60’s I believe a famous Architect, Richard Ventura and two other authors, Denise Scott Brown and Steven Izenour, wrote ‘Learning from Las Vegas‘ which ‘made sense’ of the chaotic sprawl that American cities were becoming.  Essentially they said ‘look how, if you look at things like parking lots, telephone poles, and other urban artifacts, that they DO form a pattern that we can all appreciate’ (to very roughly paraphrase) which essentially gave Architects the license to design anything they felt like without regard to context of an overall effort of building a cohesive composition.

Now before I continue I do believe there are two basic modes to consider when designing a building, one is ‘stay contextual, adding to and enhancing the quality of the context in which your building sits,’ and two ‘design something that stands out and is a landmark onto itself, enhancing the context through juxtaposition.’  Roughly speaking it is the Architect that must determine which is a more appropriate response to a design problem.  If a neighborhood is suffering, that is there are many open lots, decaying buildings, a population that seems to be fleeing, and a remaining population that appears to be suffering, then the only response should be a contextual solution that helps knit back the fabric of the community.  You see, when confronted with a ‘downturned’ composition, one can look at the composition as a blanket that is full of holes, you either throughout the entire blanket and start over, a not very practical solution, or you begin to fill in the holes with something similar if you are rehabilitating existing materials, or slightly different if using new materials, in order to show others that the community that they live in is healing.  And for the other circumstance, where an Architect is confronted with a site that is surrounded by buildings that are consistent, representing well the time in which they were built, then the opportunity arises to create something totally new, to allow it to juxtapose itself to the context and represent our times.  Both solutions show sensitivity to the context, for it is only a fool who ignores their children, those who are new to the world, or their elders, those who are old to the world, but instead makes their own way with consideration for others.

And what about that hill town, what makes it a unified composition?  It certainly has to do with the materials selected, that were ‘harvested’ from the land that those particular people had access to, thus giving their particular town a unique feeling, color and mood, but it is also the forms that are in scale with one another, and the shapes, massing, openings, stacking, juxtapositions, they all work together to create a unified composition, that while it functioned well during it’s time when a horse and cart where king, can still show us an example of how to create a city even when vehicles are king.  For it is those who visit our cities that will determine in a split second as to whether they want to stop and enjoy, or flee to some place safe and familiar.

I stress this importance of rebuilding the fabric because it is all too often that Architects, and sometimes even Engineers who are hired by developers who design buildings, that have a total lack of appreciation for the harm they are doing our built environments with the structures they build.  That they don’t understand those ramifications and look towards the immediate financial costs of building as a way to determine design solutions, even though if competent they could do both, that is build cost effectively and enhance our contextual composition.  Yet, because they lack the basic education, or yield to the ‘Learning from Las Vegas’ mentality of ‘go ahead and build anything, it doesn’t matter, no one cares’ that we continue to watch our communities fall into discord, chaos and sprawl.

So, if a designer, architect or developer can not achieve the basics of understanding good contextual design and its importance to building a community composition, I say they should never be allowed to attempt to create an iconic landmark, which many, laughably, seem to think they have a right to attempt.

Should new buildings try to look like old buildings?  No.  It’s like wearing a red shirt and putting on red pants in order to match.  They won’t and they will clash.  A suit is a uniformly design outfit, but when confronted with existing versus new one needs to be sensitive to what is there, like the shirt, and put on something that will ‘match’ or compliment it, like one would do to make a unified outfit that doesn’t clash or look gaudy.  It’s simple, if you have a striped shirt, don’t wear striped pants.

Don’t forget to subscribe to our blog (top right column).

One Reply to “When to design contextually, when to make a statement.”