It’s that time of year again as I’m reminded by the twin lights which were turned on tonight, Friday, September 4, 2009… I kind of wish they’d stop turning them on, not that I could forget, it’s just that  I don’t need an in the face reminder to remember…

I wrote this up as a rebuttal to conspiracy theory arguments I’ve seen on many sites about the events of 9-11.

This was first posted on another forum and thought I should share it here at me home  so keep in mind parts may seem disconnected as I was trying to answer some questions people had posted.

If you have your own questions regarding whether or not 2 jet planes could bring down the WTC towers, feel free to ask. 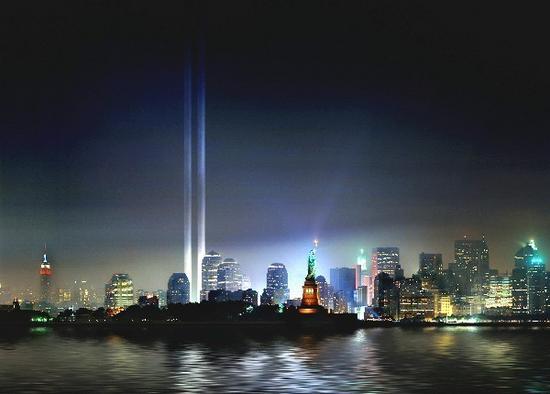 As an architect myself who has actually designed high rise buildings, unlike the architect in the report (mentioned) (architect ‘gage’ designs shopping malls who proposes some ‘theories’) I’d like to share my opinion

I have designed high-rise buildings mostly in the US but also Australia, China, Russia, Middle East and a couple other places.

First, look at what happened first (planes crashing into the towers at a high rate of speed increasing their inertia for every mph faster they travel) and think about the actual damage it caused to the overall structure… 2 massive holes (one each side) which cut through several floor levels.  Think about this destruction before you consider explosives must be involved.  That was the start of what would lead to a collapse…. a removal of a percentage of the structure making the remaining structure hold up the floors above which they weren’t designed to do.  That is, each column is designed to hold up the weight of the columns above it and a percentage of the floor area above it, plus a safety margin and compensation for normal lateral forces… that’s all.

Let’s assume a contractor was going to demo the towers not using explosives but by removing steel… would he start at the top of the building or in the middle?  Of course the top for fear that removing the some of the middle columns would cause a collapse.  Seems simple, but if you overlook this important fact then you’re missing an important ingredient of why the buildings came down.

Second: planes fully loaded with fuel exploded (causing further structural damage) causing the spray-on fireproofing to become unattached to the steel floor trusses.  After all, the only thing between the occupied spaces of the WTC and the trusses is dropped ceiling tiles which could easily be blown away from the explosion, along with spray fireproofing which feels like semi-soft egg carton, again easily blown off.  And then one has a raging fire, of which the offices of the WTC have plenty of paper and other materials to feed the fire… keep in mind that I’ve been on the floors of the WTC and knew what they were like; and, after the tragedy watched with my own eyes 10’s of thousands of pieces of paper float with the smoke over brooklyn.  Anyway, the fire could easily melt the trusses causing them to bend down in the center and pull away from the perimeter columns…. and as firemen say “never trust a truss” because a truss is made up of very thin metal unlike a steel beam, meaning that it would  take less heat to make it melt… a truss, made up of webs in the shape of triangles to reinforce the main angles of the truss.  And what were the trusses holding up?  5″ thick concrete slab and all of the weight of a raised floor system, desks and filing cabinets, partitions, etc.

Third: the rest is gravity as one incredibly heavy floor slab fails causing the next to fail.  These fall straight down only slightly pushing out on the columns.  The columns themselves span 2 floors and are bolted together typically failing at these joints…. they don’t somehow push straight down crushing each other but instead fail and tumble, sometimes twisting and distorting.  The exterior columns were put in place in sections and many fail (deconstruct) in the same way.  Some columns in the video can be seen still stand for some time after the majority of the building fails and can be seen failing on their own without the cloud of dust… not so much falling to one side but failing vertically because as they start to tilt the massive weight and gravity causes even these to fail in a vertical fashion.  Some sections are seen tilting away.

Molten metal and ‘thermite’ (a combination of rust and aluminum, see vid) can easily be understood from the pulverization and heat generated during the failure.  It’s like a chemical mixing lab and I’m sure there were all sorts of ‘results’ that theorists never pointed out.  Puffs of smoke exiting floors?  Think about when you blow up a bag and pop it… it blows a hole in the side somewhere to allow air to escape and think about how much air is trapped on each floor and how, like a train traveling thru a tunnel the air starts to compress.  I know from experience that even traveling up the WTC riding their elevators not only do your ears pop like when flying but that there is air pressure just from this as you could hear it rushing by.  The resulting air pressure through these shafts must of been intense during a total building collapse.

Should the towers have tipped over?  You have to come to terms with the enormous weight involved… tilting assumes that the structure could handle traveling in a horizontal direction… there’s no way, this isn’t a ship with a continuous steel hull and the connections are not equipped for that kind of movement… failure is generally vertical.  Comparisons to short concrete reinforced structures that are demo’d are ridiculous.

Now, I was in the general area during these attacks on our nation, conspiracy theories whatever.  Please don’t over look the fact that airplanes were purposely flown into these towers that resulted in the deaths of so many innocent people.  I had colleagues who saw body parts and people falling from the towers… it was no joke and the idea that someone who’s looking for attention would try to use these dead people as a prop for their own glory I find disgusting.  If you need heart surgery, go to a heart surgeon… if you need to know what happened here, ask the real experts and listen to what they have to say.  and that’s my opinion.

Pulverizing concrete is easy, just grab a sledge hammer and a chunk of concrete and see what happens.  Consider that each floor is only a few inches of concrete in thickness and in large flat slabs all falling down and grinding on everything else as it falls, and with incredible force (not that of a sledge hammer) and I think you can imagine the pulverization of it.  Adding to this, the concrete itself acts as a grinding solution that pulverizes everything else.  Which brings us to the the thermite question and if you consider the above to be a natural process of grinding aluminum and other materials together and mixing them one would no doubt find all sorts of chemical mixtures.

Buildings don’t need to be fully engulfed in flames to fail, like building 7.  Not sure if you realize but there were a couple of other buildings that also failed, the Greek Orthodox Church and the Hilton Hotel.  In Bldg 7’s case, the lower center floors were damaged with debris and the flames intense enough to cause failure and resulting domino effect of the rest of the structure.  The building first fails near the center south and quickly spreads outward.  The sounds of ‘explosions’ are huge steel beams, concrete slabs and other structure failing.  Think of how loud a car crash is and then imagine this happening on the scale of a building to understand a bit about the forces that act on a building when it fails.

Looking at the other side of things, do you really think that once the buildings were attacked, that somehow some government official called a ‘ready and waiting’ special force of Americans and said ‘put plan x into action’ and they somehow set off a controlled demolition within hours of the attacks?  I mean if you’ve ever looked at footage of a real demolition of a building, you know that it takes at least a week to partially demo the building and set up the charges (buildings have to be prepped before a controlled demolition can occur, including the weakening of the structure and the careful setting of charges to ensure they cut the steel… let alone the miles of wire, protective coverings, etc. that are required).

As for ‘pre-wiring and adding explosives to a building before the attack, just in case it is attacked so the explosives could be set off to destroy the building’… and, of course in this case ‘hoping that debris from another attack falls on the building you want to blow up, and hoping that it sets fires so that when the explosives are set off it won’t look obvious and therefore be a perfect cover’ is, really far fetched.

What it comes down to, the more you learn about the subject, from the correct point of view, the more you’ll understand that there was no conspiracy except that of the terrorists.  Unfortunately ‘the facts’ just aren’t as exciting to think about, but you’ll have to get over that on your own terms.

The twin lights were turned on tonight in New York City.  That time of year again.