Based on the previous post, lets look at what defines a neighborhood.  Certainly in most neighborhoods there is an implied center, perhaps a linear street filled with shops, that becomes the focus of people’s daily needs.  Part of what makes a perceived center is the quantity of people who are there.  Without the people there is nothing but empty hard surfaces.  Ok, so we have a center, people, stores or some focal area that is acknowledged by the community.

Moving outward there is the support of that center, essentially all the housing.  Without it there aren’t enough people to reach a critical mass to help define a thriving center.  This is one of the fundamental problems with modern mixed-use projects is that they forget to add people to the mix, or if they attempt to they do not integrate them into the proper environment that makes it inviting for those people to want to ‘be there.’  Instead many large mixed use complexes rely on visitors, strangers to keep their critical mass alive… but I digress.  In a neighborhood there needs to be enough people at a convenient distance to the center. 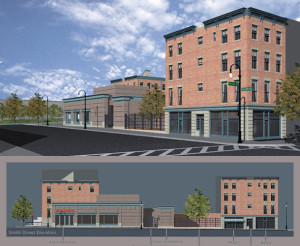 Next comes the edges of a neighborhood.  This is what can help define if you’re entering a special neighborhood that has definition, or whether you are anywhere in the city that is non-discript and forgettable, like so many hoods are, that blend one into another.

Typically in NYC and especially Brooklyn I like to think of the boundaries as being man-made by highways, canals, industrial areas and other ‘city as machine’ functions.  The problem is that when these modern functions were put in they separated neighborhoods.  I call them scars, like those on a person.  While we can live with scars most of us would like to avoid them, especially on our face.  And that’s basically why if there are too many scars in a neighborhood it is bound to decline.  Fundamentally while they might define, they also make people want to leave.  Take the BQE highway next to Carroll Gardens Brooklyn.  It is dirty and noisy to live near.  Because of it, people have a hard time justifying living on the other side of it.  People do live there but certainly it is not their first choice.  Lower rents make up for the inconvenience.  The result are smaller hoods that just can’t support themselves in a healthy populated way.  Obviously the highway needs to be ‘eliminated’ by covering it to help stitch those two hoods back together… leading, by the way, towards the waterfront that is blocked by other things, like port buildings..

So this brings me to another point.  Responsibility for the cleanliness of your scar.  If you create a highway, and your attitude is ‘here I am and to bad’ then you are not a good neighbor.  To put that in perspective, the houses that line the BQE are not disrupting commuters nor the highway, but the highway certainly is disrupting the people, and houses (dirt, smog and the like contribute to deterioration and the sense of a declining neighborhood).  It is common courtesy that the BQE should be considerate to those around them and take the required steps to become a good neighbor.  If this can’t be done then block the road and don’t let any more vehicles use it.  And if the buildings were to disrupt the highway, the same goes for them, board them up and don’t let anyone use them either!

This same attitude should be applied to any owner who owns a manufacturing property.  No parking on the sidewalks with trucks or other vehicles because what you think you’re doing is so much more important than 95% of the rest of the city, as you won’t see me walking down the center of the street blocking traffic, so don’t block me while I walk on the sidewalk, got it? To the maintenance of their facades, as the residential neighbors would certainly do the same if they weren’t looking directly at your ugly face across the street; and, repaired, cleaned and shoveled sidewalks, as certainly all the neighbors do the same for their property, and that is your property, so what the hell are you waiting for, unless you can’t handle the responsibility and if that’s the case sell it already to someone who can.  In other words, own up or get the hell out.  Why should the residential neighbor across the street who’s put all his/her money into a property have to see their investment vanish just because you’re a lazy inconsiderate and blind fool.  You might want to live in a pigsty and go ahead, in your own living room, but not in my hood.  The reason is influence.  You have an effect on other people’s properties, just as calling someone a name might cause them distress and affect their self-esteem and confidence, you too, with your falling apart building does affect the psychology of a neighborhood.

Do I think neighborhoods should be defined on the edges?  Sure I do because belonging to a place is a good and necessary thing, but that means actually designing the edges like an artist acknowledges the edges of a painting, it’s part of the composition and will have a frame around it… it is well defined, and that can only be done with a deliberate force and will to succeed.  As such there are other ways to define neighborhoods and their edges, though the use of like materials, building sizes, details and forms, and on and on.   Actually I think neighborhoods should be kissing one another, that is approaching each other and bridging across in a pleasant way, and yes that can be done architecturally.

Next Time:  Perhaps I’ll write about why neighborhoods are good, just the good stuff that makes them worth being there.  That may help define why other neighborhoods lack those things.

You’ve got to be asking, is this stuff really important to an Architect?  It has to be in order to be an excellent designer, one that can create the types of buildings and environments that become successful.  As an example on a smaller scale, I can spot a failing store, and one that will survive, and see when the surviving store is turning a corner and on it’s road to failure all based on the mood it portrays based on what’s built and how it is maintained.  Architecture is influencing us and our choices, in good circumstances making us feel better about where we live and what we’re doing, in bad conditions making us feel depressed and forgotten.  A great architect in my opinion takes into account maintenance in order to keep the hard work to create and build it a steady source of positive influence.  Check mate!… except the part where I forgot to talk about actual bricks.