What do I mean by designs that are a waste?  Well, some projects waste time, money and resources.  One can imagine a project that isn’t financially successful, has wasted resources, as the longevity and usefulness of the building will be diminished.  I’ve witnessed where a renovation is completed and in 2 years, after the tenant moves out the space is re-renovated. Materials are wasted too, in this day when there are environmental concerns, what’s the point of designing and building something that gets torn down in a couple of years?

Time is also wasted.  An owner of a property invests his time as well as contractors and professionals time and when the effort is tossed, all time is lost as well.  These first two components obviously leads us to money.  If you put things in the wrong functional relationships, use tacky looking materials, incorporate poor proportions, don’t detail and install properly to prevent maintenance issues, you’ll end up with something that will have to be rebuilt… all costing money.  The most obvious impact is when, if you’re able to get a tenant, they leave after only a short period of time and you’re confronted with a high turnover rate, if you’re able to lease in the first place.
It’s sad for me to watch people take large amounts of money to make a project a reality and essentially throw it away by trying to save what amounts to a small percentage of the total cost by hiring Structural Engineers or drafts people to do the architectural work, assuming that hiring an Architect would cost more up front.  The loss comes over time when the owner struggles to manage something that shouldn’t of been.

The above image is for my blog: What a Waste. It is an example of a developer who hires a structural engineer to design and build this new building. It looks fine, except one thing, it covers the entire lot which means it doesn’t follow zoning and the required FAR. This means the building can not be occupied. It has sat empty for 3 years now. 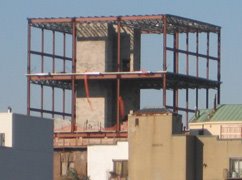 Above you can see how a Developer ignored Zoning causing this project to be stopped in it’s tracks leaving an eye sore for the entire community. The Developer used a Structural Engineer to design his building.

UPDATE: May 2011, after this article was created: They’ve taken down this steel and are working to remove the masonry elevator shaft. The steel, once used can not be used, or reused again. By code it can only be melted down and reformed into new material. I’ll let you figure out the waste, of time, money, man-power, effort, impact on a community that had to endure its appearance, waste of energy to transport, erect, disassemble, and remove, melt-down, reform and ship again to a new location and the environmental effects of all of that…