Humanity has reached a point where even our efficient American urban grid is becoming over burdened. The constant need for repair and upgrades to infrastructure, including utility services can often be the component that puts cities in the red. By analyzing every aspect, including quality of life issues, one can assemble the best approaches into a solution that provides clean and highly functional worlds to live in, and thus harness built-in savings into building worlds that are also more beautiful and varied.  This study looks at only one aspect of that puzzle, and that is how utilities are laid out in a typical urban block, and asks the question ‘is there an approach that minimizes the length of those utilities’ with the knowledge that if one can save half of the material, then one is also cutting maintenance, replacement, inspections to half.

That, if it can be accomplished, would represent a significant savings to both the city and utilities, but also to its citizens.  Further, if the utilities were located in service tunnels, instead of requiring them to constantly dig up streets, the result would be that we could make longer lasting roads instead of being forced to use asphalt because it is easy to remove and replace for the sole purpose of allowing access to lines ‘buried below the street’.  But that notion is getting ahead of ourselves.  For now, this documents one simple aspect, that by positioning utility lines in the best location, there is a significant drop in the amount of material required to service all buildings within a given block.

First we start by defining a typical residential block in New York City.  Taken directly from a Zola map, this block is very typical in that one has shorter Avenues connected by long streets.

Next we need to acknowledge how the existing utilities are located, in order to have a base calculation for their lengths. In the example below, there are roughly 3125 feet required to serve buildings on both sides of the avenue and street. 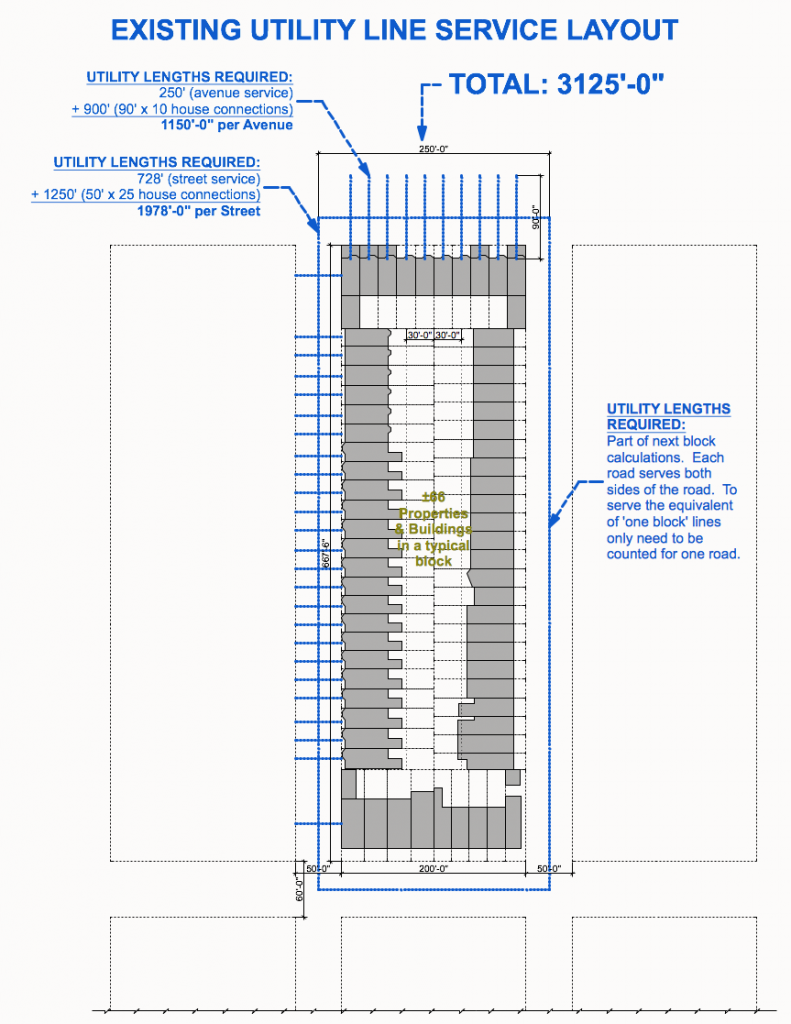 Next we explore a simple alternative, to run the lines through the center of the block to allow us to examine an alternative approach. 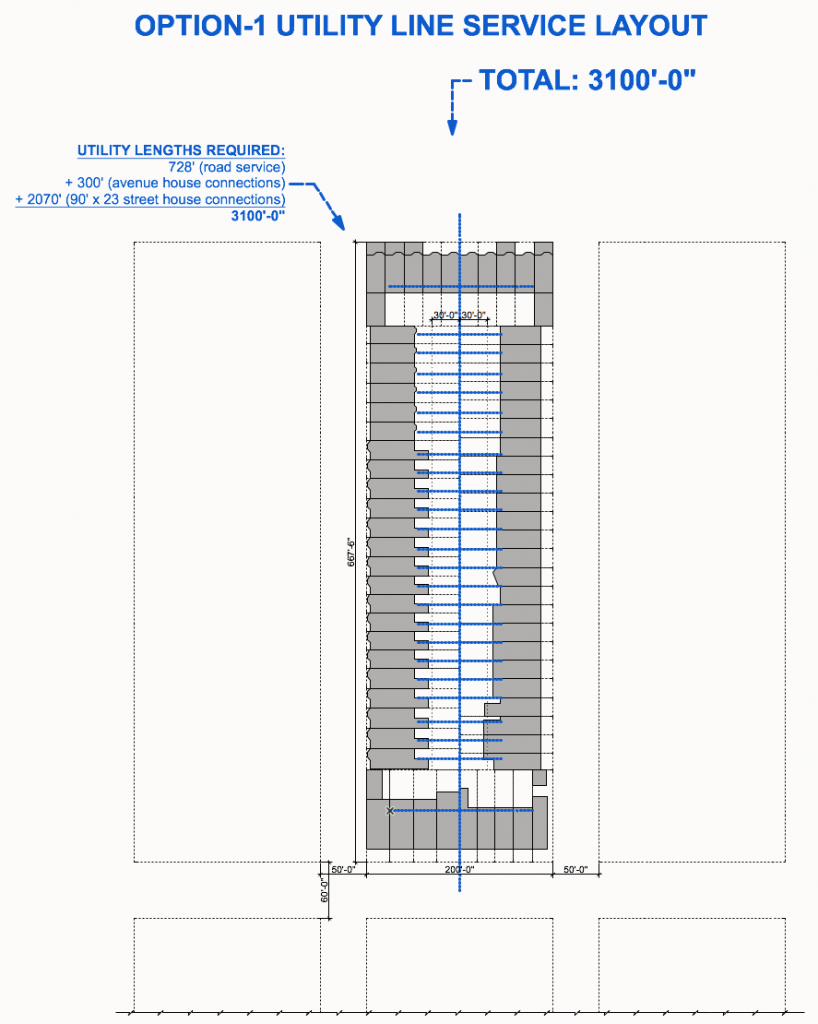 The approach, Option-1, pushes the avenue line towards the rear of the buildings that are adjacent to the avenue, and connects to a center spine which then branches out to each individual building on the streets.  The branches are themselves longer (90′) than the conventional approach (50 feet) but the avenue approach provides us with a very modest savings in overall length of 25′.

Pros: no digging of street and repair, no interruption of traffic. Slightly less line length because Avenue connections is so much more efficient.

Questions: Can the ‘con’ be eliminated with access tunnels? Can the length of lines be shortened by having two parallel lines (option 2) which essentially connects the ‘street buildings’ the same way as the ‘avenue buildings’?

Option 2 approach:  Here we throw out any concerns about the reality of actually connecting to buildings where the utility lines are below or adjacent to the structures themselves and look at it from purely a ‘length study’ point of view, and we get this: 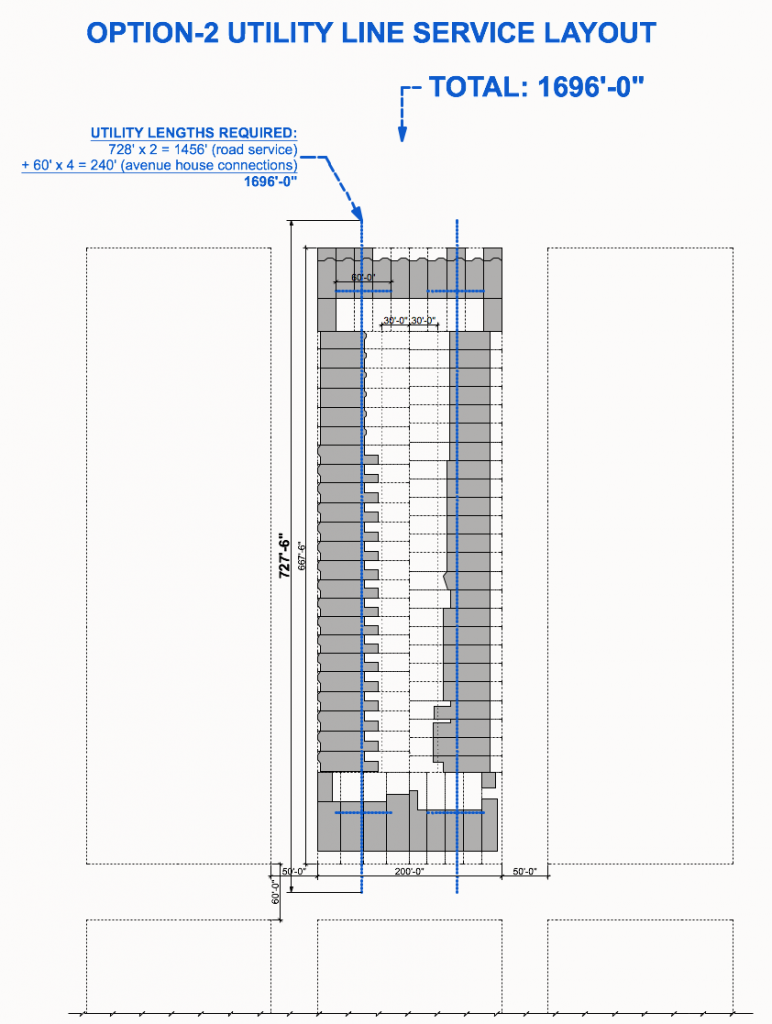 When we compare the total lengths between the conventional approach which totals 3125 feet, and the Option-2 approach of just roughly 1700 feet, there is a significant savings of 1425 linear feet.  When one accounts for every block in New York City, that would have meant a massive savings in material, and as mentioned the time it takes to maintain the extra lines. For every 3.7 blocks, that is a savings in one mile of length.  When we consider that could apply to each of the utilities including gas, electric, cable, telephone (approaching complete obsolescence), water service, storm and sewer lines, it means that for every 3.7 blocks one is saving 6 to 7 miles of service lineage.

Same Pros/Cons as before, but the overall length of required utility line is cut nearly in half suggesting a significant savings in material.

Questions: The real question is, is there a way to both safely run all utilities ‘through/connected or adjacent to buildings’ and do so in a way that provides easy access for maintenance workers, replacement, etc.?

I know the answer is yes, because I’ve worked on this problem for some time.  That is, to create buildings that integrate tunnels into their structure just below grade level, which works with certain types of housing units that best benefits owner occupied housing and renters.  The ‘tunnels’ are more like corridors that provide personnel access in dry well-illuminated conditions for 24/7 access, protected from severe weather, and can incorporate customized utility vehicles that have no need for street access and run fully on electrical power.

But beyond speculation on how it would all come together, the real success here is this: there is a better way.  How many hundreds of millions get wasted just for digging up streets and sidewalks?  To then have to ‘come back in a few days when hopefully the earth has settled enough to patch the road, understanding that this newly disturbed soil can continue to settle requiring the city to come and repave the entire street.’  How many billions are wasted on this exercise over a decade?

And having another eye on ramifications of such an approach, a non-street utility service would leave roads in a better position to have them upgraded to more durable materials.  And as such it would not only reduce the maintenance but offer opportunities for design of better streets.  For instance, the use of rough warning patches to warn drivers if they are leaving a lane, or different colored roadways so that lines and crosswalks are permanently marked instead of painted on with materials that last at best for a month, and think of this, always being able to see lines when it is raining and at night because those lines aren’t only a different road material but they are also roughed up surface making them easy to see when the road is wet and is reflecting light.

But the real impact is money, the savings of maintenance, and its impact on the quality of life for the city and its citizens.  When one considers the piping required for one bathroom, there isn’t much to worry about if one has to run the pipes around something, but if you’re considering an entire city, one better make it as highly efficient as possible, and I use the word efficient to mean ‘make the lengths of whatever you are proposing as short as possible, positioned in a system that allows for maximum ease of access.’

Cities around the world are swelling to enormous sizes of 10, 20 and 30 million people. Without a comprehensive approach, humans of the future will be overwhelmed by the shear scale of maintenance alone, putting in jeopardy the city itself and resulting in the direct suffering of millions of people.  While cities like New York may be beyond repair as its template has been cast, its surrounds have not, nor have other cities around the world that have the need to accommodate millions more people every decade or so.