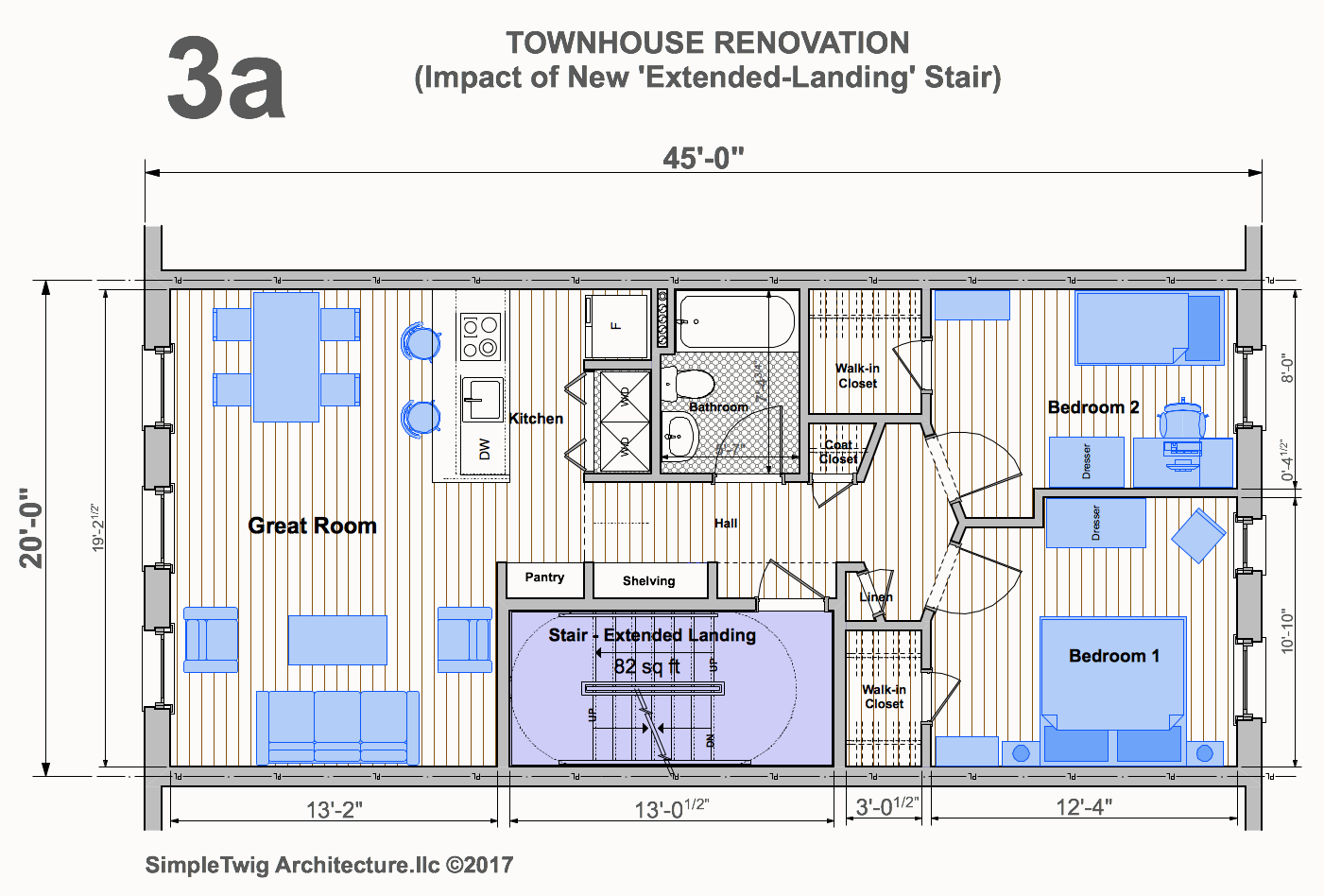 The following will be superseded in a following article, with an alternative stair configuration, one that changes the orientation of the stair yielding more living room space, and it superseded by yet another ‘total configuration’ that minimizes the square footage impact of the stair from grade to the roof, acknowledging that stairs can have modified configurations on each floor.

This may seem a silly exercise, but we feel it is important for our clients and developers to completely understand the impact of their choices and have clear examples of what everything means.  For the most extreme alternative, the ‘compact’ stair, the savings in square footage in a 45′ long townhouse is 148 square feet.  That equates to $592/month in extra rent, or $7104 per year (assuming $4/square foot, a 600 square foot apartment would get $2400/month conservatively).  In ten years that equals $71,000 extra dollars in one’s pocket.

To understand the problem, we first look at the traditional townhouse stair, considering its pro and cons: 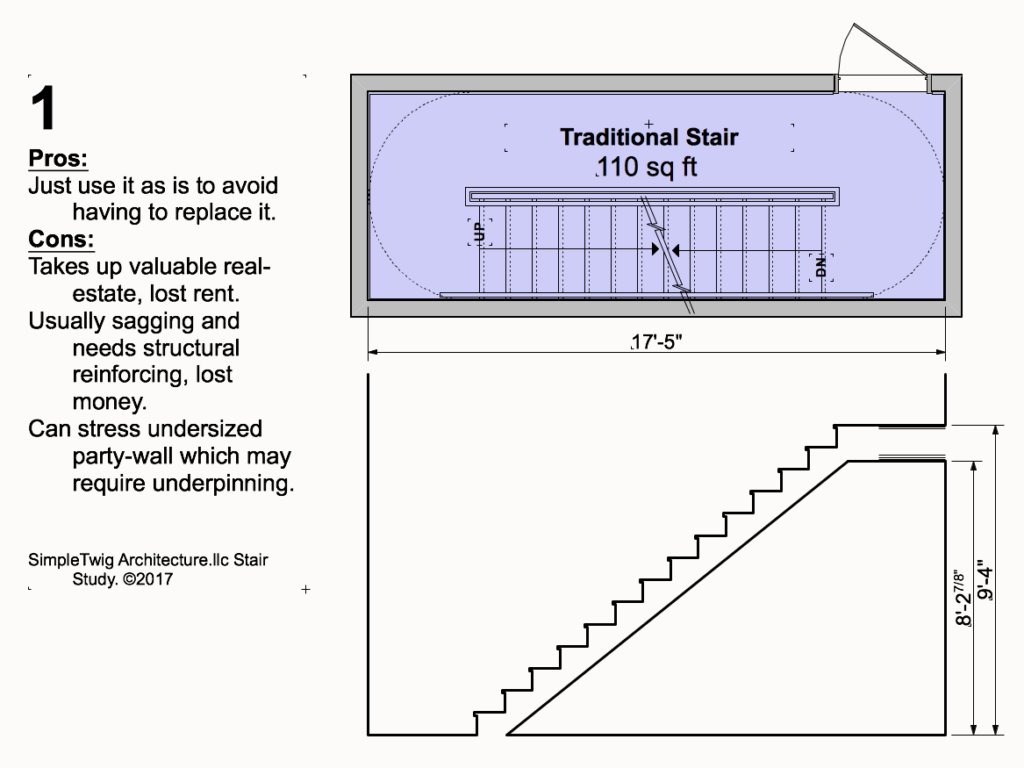 The impact on a layout of a typical townhouse is clear. The space available at the ends of the stair is typically cramped, coupled with an existing bearing wall that further makes the space narrow.  The result is a long straight-run stair with two landings as the end connected via a hallway.

Originally this hallway was part of the home and functioned to connect the rooms within the dwelling. But as we all know those doors were closed making one door an apartment entrance, leaving the hall and stair as is.  Now the hall served only one function, to get a person from one landing to the other, essentially occupying about twice the area it needs to function had it been configured for multiple apartment units from the outset, but then again that doesn’t make for a grand home.

And lets speak to that point, that if a traditional stair has all the mahogany detail including newel post, spindles and handrails, then perhaps it is worth saving, especially if it is a single family home where the hallway is used to connect rooms and the rooms themselves are not connect internally.

But when all floors are represented by individual apartments, there is no need for a hallway, just a stair that connects each apartment door to the exterior of the building, and thus this study to determine the smallest footprint for the stair to accomplish that task. 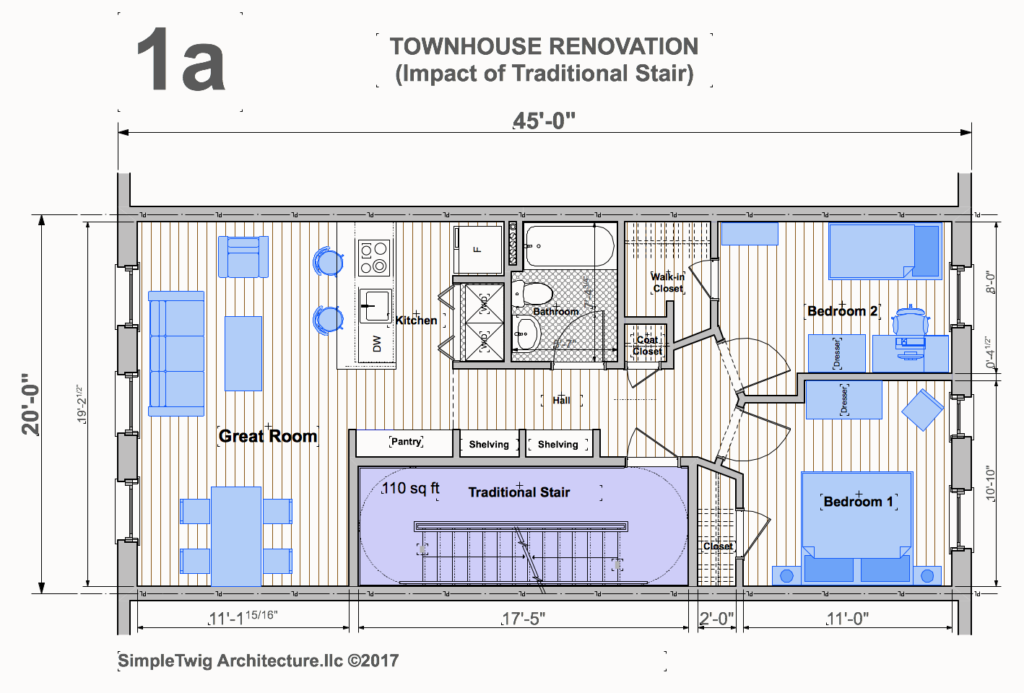 Typical traditional townhouse stair, often salvaged even when it has no architectural merit.  It’s impact on the apartment is clear, the spaces at the front and rear are small, and in general there is less space to accommodate closets and other things, like larger rooms.  While the above floor plans proves that one can create a 2 bedroom apartment if the budget doesn’t allow for stair replacement, it is not ideal and will result in the loss of a significant amount of potential income in the years to come.

Next we will look at the other extreme, the ‘compacted stair’ which minimizes the stair landing, not always allowed in some buildings where a door swings into the path of egress, here allowed since the doors swing into the apartments. Still, with such small landings it is not a very friendly layout and makes moving furniture difficult.  But at just 73 Square Feet, it saves 37 square feet which can be put back into the apartments on each floor. 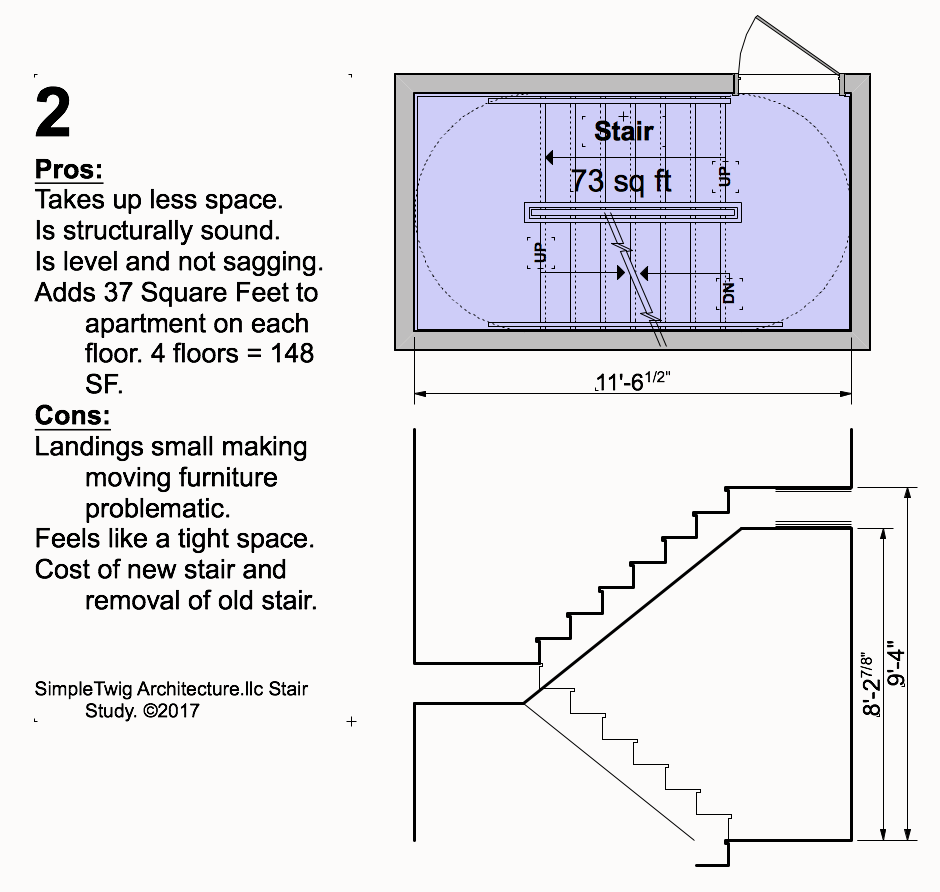 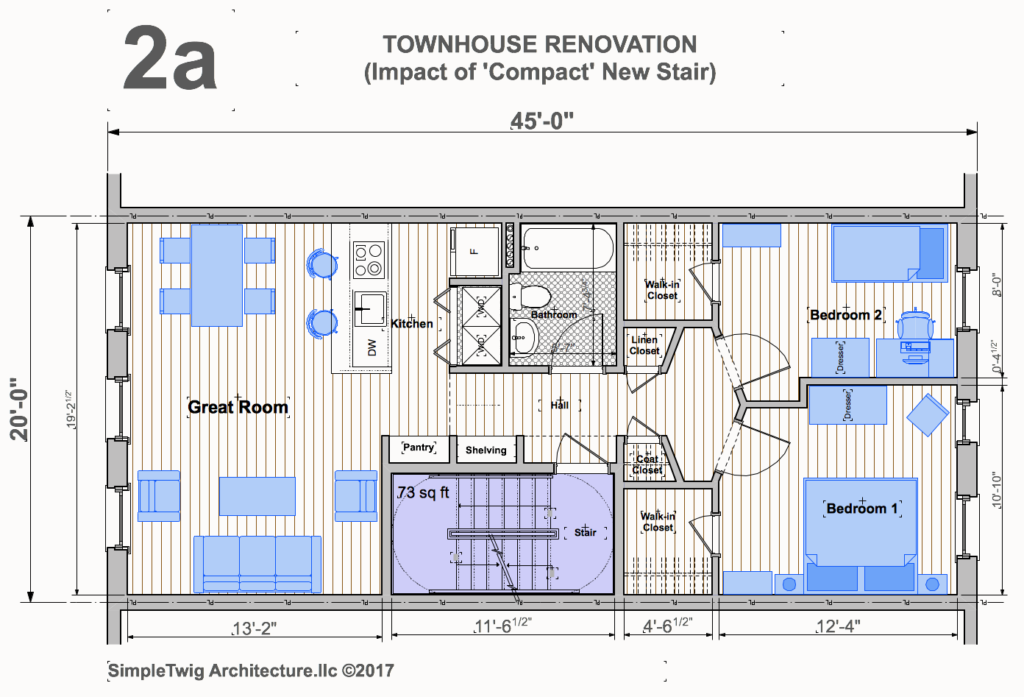 Next we look at the ‘Extended Landing Stair’ which provides ample room for tenants to enter their apartment while other people move up and down the stairs.  The downside is the extra space is tempting for tenants to store bicycles or other items which is strictly illegal.  What’s needed is just a little extra space at the apartment door, where two people could stand without impeding the flow of traffic from others wanting to move up or down the stair. 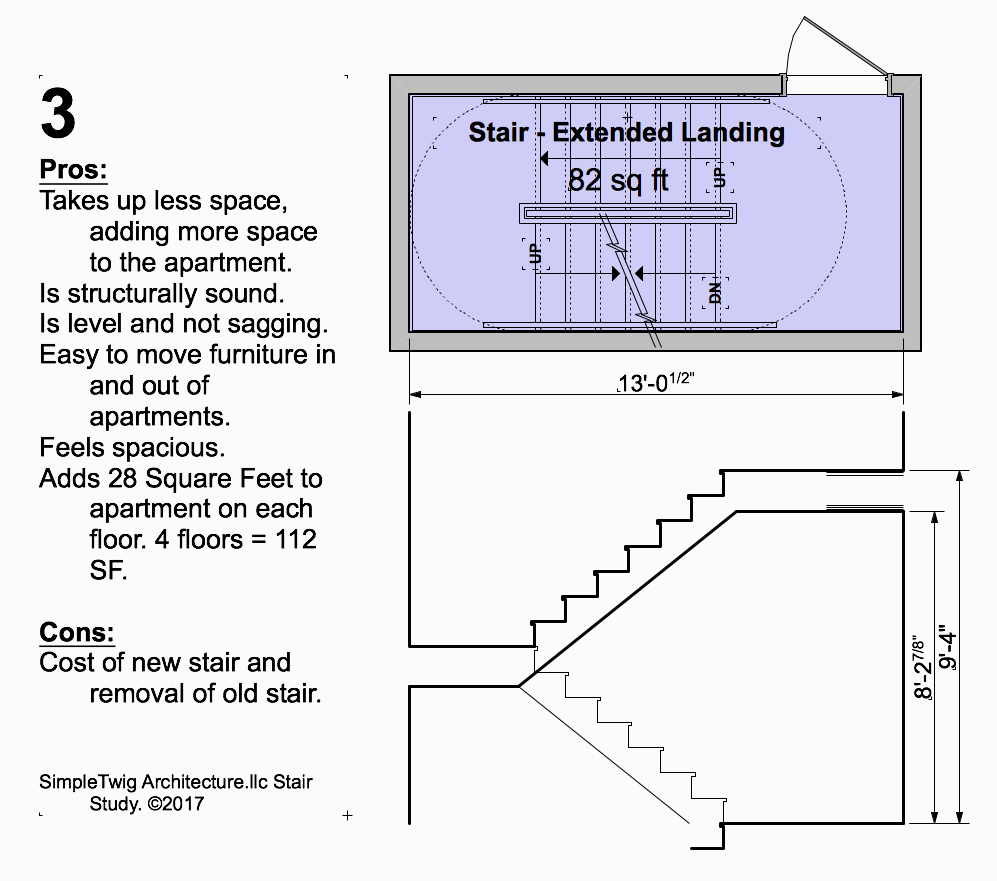 Using just 9 extra square feet over the ‘Compacted Stair’, the ‘Extended Landing Stair’ provides the room people expect while saving 28 square feet over the ‘Traditional Stair’, translating into 112 SF for a 4 story home or about $448/month extra rent, or $5376 extra per year, or $53,800 over a ten year period not accounting for rental increases.

Lets say the new stair costs around $40,000 including new footings and structure to the roof.  The extra rent would pay for it in about 7+ years.  But more important is the happiness of your tenants who, with better apartment layouts, will be less likely to want to move out, reducing costly downtime.  After the payoff period, the extra money above and beyond the basic rent makes upgrading a no brainer. 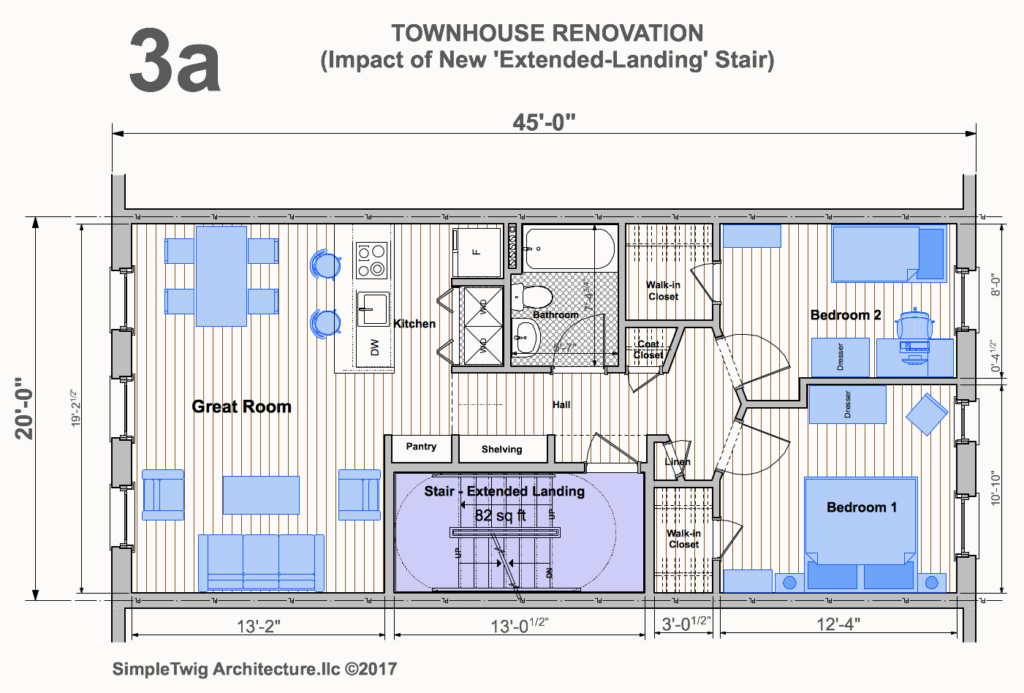 The only ‘loss’ with the extended landing, is a slightly smaller walk-in closet and smaller linen closet.  This apartment has a Great Room consisting of Living, Dining and Kitchen.  It has a full Laundry, side by side units and a floor to ceiling pantry keeping the kitchen free of wall cabinets and allowing the entire space to feel open and light filled from its three fully accessible windows.  The bathroom is large, there’s built-in shelving in the extra wide hall (3′-2″) and there’s a real coat closet next to the front door.  The bedrooms are a nice size and they both have walk-in closets.  This is an apartment filled with light, has a nice anti-chamber outside the bedrooms, and would be the joy for any tenant who was lucky enough to get in.

The kitchen: With accessible countertop space, a gas stove, microwave, large sink and dishwasher it has everything one needs. The large floor to ceiling pantry, within easy reach, provides all the extra storage one needs for a kitchen keeping the rest simple and efficient.  If push comes to shove, the laundry could stack facing the hallway freeing up some more space for another floor to ceiling cabinet.

Finally we look at a stair that provides us with the smallest footprint while offering a little extra space at the apartment doors.  Despite its small size, it actually allows for an open space in the middle which would allow light from a skylight to filter down to the lower floors.  This is a huge aesthetic bonus as light and fresh air will make the public stair much friendlier. 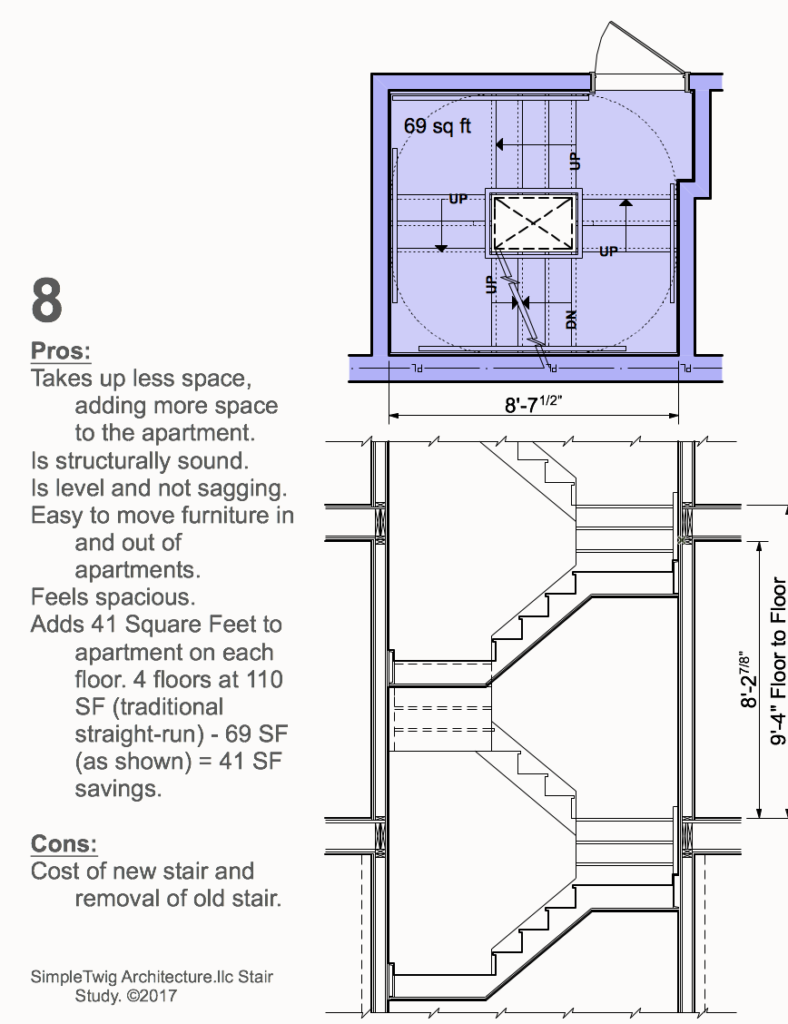 To see this option ‘in action’, please read our next article entitled ‘the Ultimate Townhouse Floor Plan’ to see its significant impact on all spaces within the apartment.  It really is the best choice and the resulting Great Room, Kitchen and Bedrooms all attest to the benefit of installing this stair in one’s townhouse, if your intent is to maximize your rents and make your tenants extremely happy with a terrific apartment.

The layouts herein are all handicap accessible.

©2017 SimpleTwig Architecture. No use without written permission. Hire the expert and don’t leave your project in the hands of someone who doesn’t think of everything, or just doesn’t care enough, because I am saddened when I see wasted budget, labor and material on something that is far less than its potential.

Actual existing conditions may affect layouts shown.  Follow us on Twitter for more articles and our feed: http://twitter.com/simpletwig.