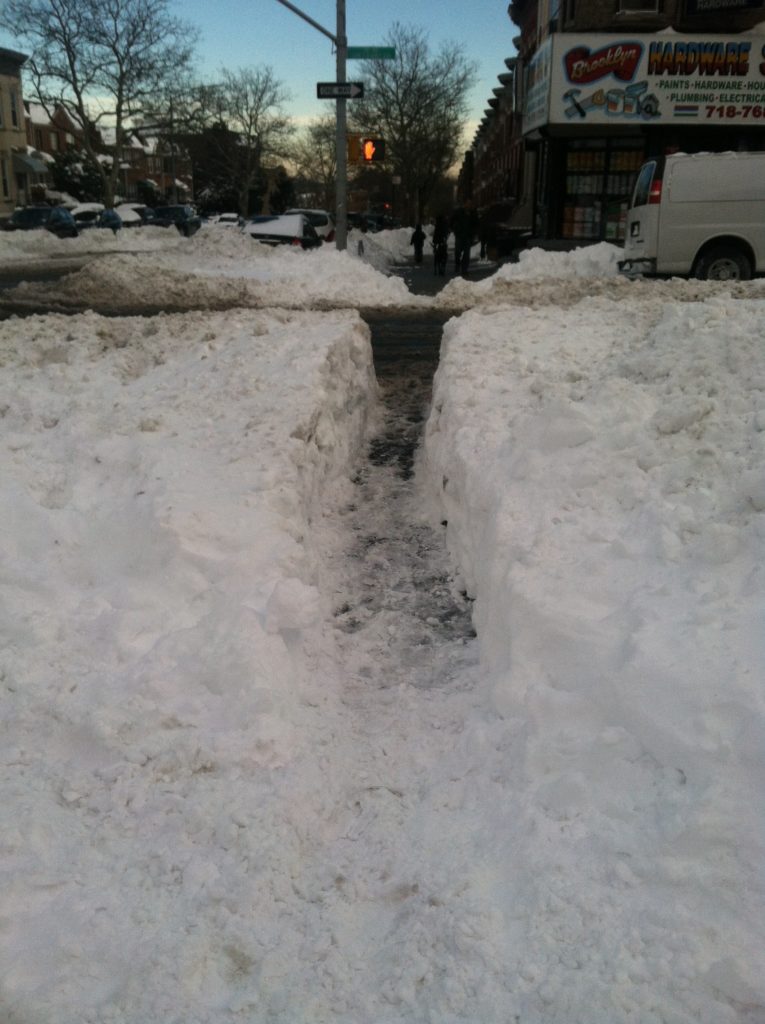 Can you imagine what this image above would look like if all the snow was melted away from the pathways?  The mounds of snow would be dirt free as would be the path, so one could actually enjoy their walk by taking in the sights and not worrying about where they’re going to put their foot next.

A natural snow melting system we would like to employ on a project one day:

The ground temperature, below the frost line during winter is about 45 to 55 degrees, well above freezing. And because hot liquid flows upward there is an opportunity to harness that heat to naturally melt snow and ice on driveways, sidewalks and paths, or even keep the foundation wall to the house warm and free from ice buildup and pressure.

With a pipe system that is laid out like a thermal floor heating system, on a slight incline upward below the surface in question, and return pipes below the frost line slightly inclined downward, the liquid (not water, but more like an anti-freeze liquid) would naturally flow up, over and as it cooled back below the grade, thus warming up the walking surface above.

This isn’t a quick melting system, but rather over a period of an hour or two would take care of most snowfalls, leaving the walking surface dry of all water after a snow storm.

What’s nice about it is it is a a maintenance free system, that once installed there is no need to shovel or expend energy to pump the liquid.

This system would be ideal where sidewalks and the property itself is being dug up, like during the installation of a cellar, where flexible pipes could be installed well below the basement slab, in order to not transfer cold through the slab (although this can be mitigated with insulation), and spread out through the ground enough so the piping is exposed to as much below soil surface as possible.

To increase the warming of the liquid and thus ensure it operates a full capacity, fins could be added to the piping, to reach further into the soil and transfer their warmth into the liquid faster and at higher temperatures.

The only downside is that eventually this system could fail.  But with the use of proper pipe size, linings can be ‘blown in’ to repair any break in the line as is already done for oil lines, water lines, etc.

There would also need to be a way to monitor that the pipes are completely full of liquid, as any air would disrupt the flow.  If the liquid started to leak, there should be a way to drain the system so as to not contaminate the ground water, and as mentioned above repair the pipes so the system could be refilled.

It would be my desire to see high traffic sidewalks employ this system, and thus give pedestrians clean safe sidewalks, leave the city without mounds of extra snow to clean up, and leave developers with lower insurance premiums because they can guarantee that sidewalks are free and clear of all snow and ice, all the time, even if that sidewalk does not get direct sunlight.