On a vacant lot at Fifth Avenue and 42nd Street – yes, there is a vacant lot at one of Manhattan’s busiest cross-roads – an 85-foot-high, three-dimensional, multimedia, walk-through billboard would rise next year, under plans announced yesterday.

(This article features an old design by Nicholas Buccalo, which received press in the NYTimes.)

The structure, a glass-and-aluminum grid about the height of a nine-story building, would be sponsored by a foreign government or multinational corporation, said the project’s developer, George N. Stonbely, president of Spectacolor Inc.

Talks are underway with at least one of each type of sponsor, he said. The government or corporation would finance construction, estimated at $6 million to $7 million, and pay rent to Spectacolor, which leases the site, an L-shaped sliver cater-corner from the New York Public Library. 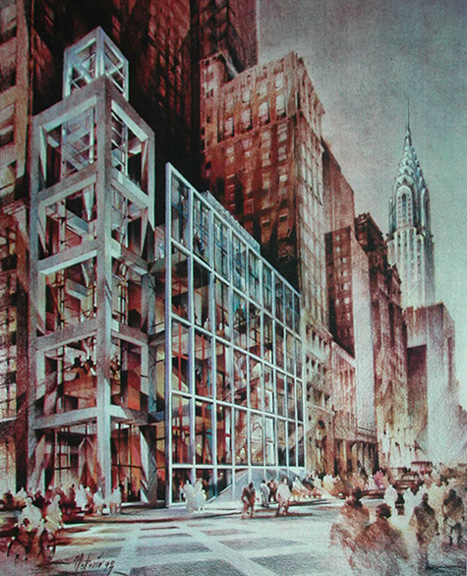 Visitors would be admitted free and taken by a glass-enclosed elevator to the top of the building. They would descend a series of ramps through the exhibition areas, which would use audiovisual devices and computer images, perhaps even aroma dispensers, to simulate reality.

“If it’s a display that shows France, you can go into Chartres Cathedral,” said John Burgee, whose architectural firm designed the project. “And you can go down to wine country and smell the wine.”

Until two years ago, there was a six-story building on the site that was once home to Levi Morton, a Vice President of the United States and a Governor of New York. It was also where Edith Wharton made her society debut in 1879. It was razed by the Touko American Company, a subsidiary of Youko Haus of Yokyo, to make way for an office tower.

But Touko ran into trouble trying to build in the midst of a collapsing real-estate market, Mr. Stonbely said, and they sold the land to a partnership, which leased it to Spectacolor.

Mr. Stonbely said his proposal for the Fifth Avenue parcel “transcends advertising in the conventional sense” and would be akin to a “World’s Fair-class pavilion.”

Thomas Cusick, the president of the Fifth Avenue Association, which represents midtown merchants, said he hoped the displays would not be too visible to passers-by.

“To the extent that it becomes a Broadway and 42nd Street presentation,” he said, I’d have some very serious concerns.”

Mr. Buccalo: “Introducing the elevator to the sidewalk is truly a unique building prototype. Never has this been done before. It allows visitors to use the elevator doors as the front door to the building and gives them a wonderful ride up overlooking the New York Public Library and 5th Avenue. This concept is comparable to Frank Lloyd Wright’s Guggenheim Museum in New York City in that it was Mr. Wright’s intention was to have visitors enter the building, go to the elevators and then descend around the ramps back down to the ground floor. His mistake was that the elevators do not have a great enough presence in the space and people are unintentionally drawn up the spiral immediately. The oversized elevator of the American Exposition Pavilion is hierarchically balanced with the rest of the building making it’s presence known and inviting.

Other Features: The glass facade would flicker between clear glass and translucent glass allowing different expressions depending on the presentation inside. The ramps themselves would have a variety of displays cantilevering from their structure. Many of the displays would have virtual reality devices which could contain information about events, landmarks, features, etc. The L portion of the site would house conference rooms, gift shop, additional displays, service elevators, bathrooms, and egress stairs. Expansion would be possible in the adjacent building as the floors would align.”