There are a lot of amazing looking images of buildings out there in the world, shell structures, large glass structures, open spacious plans, but are they really legitimate?  While they might look cool, I’m frankly surprised by the attention they get because typically I can see through the smoke and realize how just inappropriate they are.   Why?  Most disregard heat gain or natural cooling, most disregard basic functionality, most disregard privacy, and finally most disregard budget.  One thread is true for most of these ‘wonders’ is that they are cartoons of real architecture.  They generally express a ‘one liner’ compositional goal in order to create an image that is sold to the public, like a new t-shirt design, clever saying or some other graphical element that is ‘cool.’  While graphics, which don’t require the effort of physical construction like buildings do, and don’t impose themselves on the public for generations, having celebrated ‘graphics architecture’ thrust upon us in a never ending stream only undermines the profession on the whole. 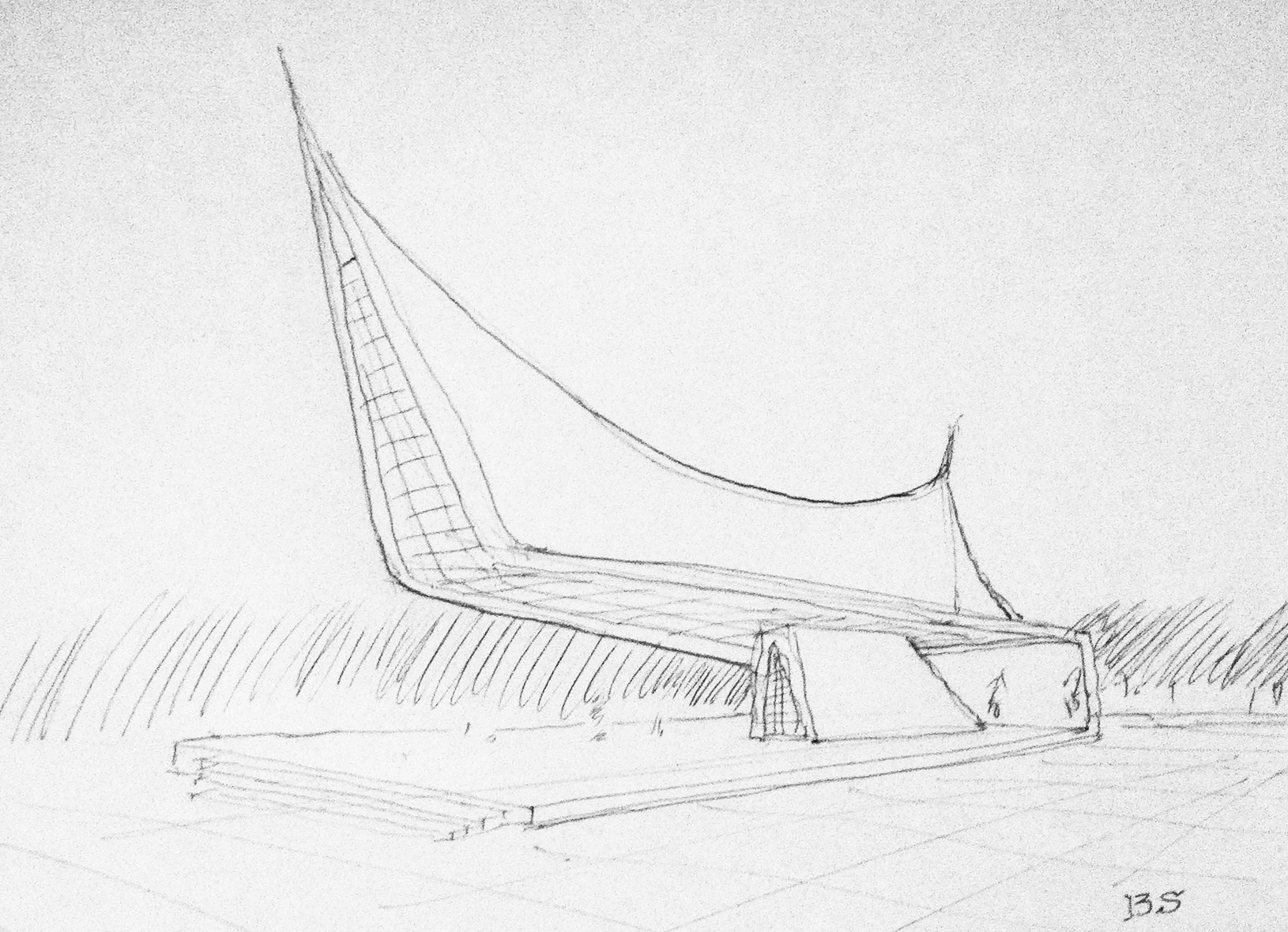 Given the above, there are also good things about such architectural graphic expressions and that is they tap into the human spirit.  And it is this reason I do like them but, I do not see why expressing a spirit of human enthusiasm must somehow sacrifice program and fundamental functional usefulness.  If function can not be incorporated into a project, then that project is a failure and not something that should be celebrated.  If the architectural expression is worthy, then so to the time to make it functional.

Making ‘one liners’ is an easy process.  It, in terms of architecture, is typically based on a single point of view image the designer has in their mind.  That is typically it is a form that pushes the compositional components in such a way to enhance contrast with it’s context, to allow the eye to move around the composition and to offer views and openness that are breath taking.  These are all wonderful attributes to have, but again, to do this in cold climates with single pane glass, or in wet climates with wood touching the ground and thus inviting termite infestation or creating a situation where exotic woods must be used, or in hot climates with no thermal protection, is all just plane irresponsible.

And then to read, as I do, the same comments that seem to forever repeat themselves over and over without any critical eye, and those comments coming from other Architects, it all makes me wonder what kind of profession I am a part of and how those same architects will reflect upon how people perceive me.  It’s no wonder our profession has lost a lot of respect over the last 2 decades.  And if you don’t believe me, here’s a few comments that people do use:

-This is so different its refreshing (mis-spelling ‘it’s’)

-wow!! (with the double exclamation mark.  Are these Architects or children commenting I wonder)

Wait, I see someone has added something very different, which says to me this person is brave to go against all the positive comments:

And this one which notices that a particular example is in the woods, and also acknowledges that the project is whimsical:

I like its slight touch of whimsicalness surrounded by nature

I’m particularly impressed (being slightly sarcastic) by the fact that they actually used more than 3 words to express something they were looking at, but then again it might of been a case of copy/paste… always good to be prepared to comment.

Ok, well that’s enough of that.  If you frequent online sites that allow comments I think in the architectural world you can just skip the comments because no one is saying anything useful.  This is because everyone wants a piece of the action, i.e. architectural jobs, and that means ‘don’t case any waves.’  Praise everyone and everything in order to try to reach that elusive prize, an architectural commission.  But, based on that very attitude, is the environment where unworthy projects will continue to gain the most attention, just like Lady Gaga’s debut, but unlike architecture, she can just change into a new outfit and really doesn’t have to live with her previous choices for years to come.

At a minimum when magazines feature a project, they should do so in a fundamental critical fashion in order to help inform the public, and rate the project, and at a minimum, with respect to climate.  All too many times architects feel inspired to propose a similar solution to what they’ve seen in a climate that makes it completely inappropriate.  This is a fundamental concern in todays information easy-access world combined with architects who wish to create the next sensation without regards or concern for the tenants of their edifices.  There are plenty of responsible Architects in the world and their projects reflect this.  You can tell by noticing if the projects looks like a crayon sketch or an in-depth work of art.  If it is the ‘one liner,’ then ask the appropriate questions in order to help others see through the smoke.