Archaeology Magazine: A Doomed People, The collapse of the Hohokam at Pueblo Grande by Michael S. Foster and Tobi Taylor. November/December 1998. Pages 44-46.
The Hohokam emerged from obscurity at the beginning of the Pioneer period (ca. 300 B.B. to A.D. 500) and thrived through the Classic period (ca. A.D. 1100 to 1450).

This reconstruction was constructed at SimpleTwig Rendering (aka: The Drawing Studio) using site plans and existing photos of what remains today. Illustration is based on actual archaeological digs: heights of building were determined by wall thickness; in the lower left you can see a typical trash mound; at the upper left you can see a typical ball court; in the forecourt you can see the Hohokam’s typical hut, probably built for shelter before one would build an adobe structure; the Hohokam used ladders for egress and ingress; they would collect clay from the stream beds and build canals for irrigation; beyond the main complex and its secondary wall, there were other single dwelling units on the ridge beyond; many activities were completed on the roof structures; construction was an ongoing process.
Reconstruction: Michael Foster, Archeologist & Nicholas Buccalo, Architect and Digital Renderer.

Some of the advantages of digital renderings are:

Limitations in technique? None, in fact when considering changes, virtual reality or animation, digital technology is the real winner. 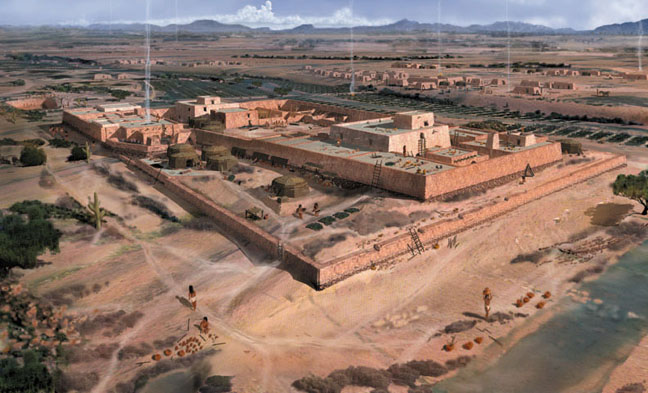