Architecture is fundamentally connected to humans. That which is not connected is not architecture.

To understand function and how it influences the way something looks, one need only look at the human machine, and in this article the eyelashes and eyebrows. While the conclusions here are based on observation they hold within them a fundamental logic which is hard to deny. 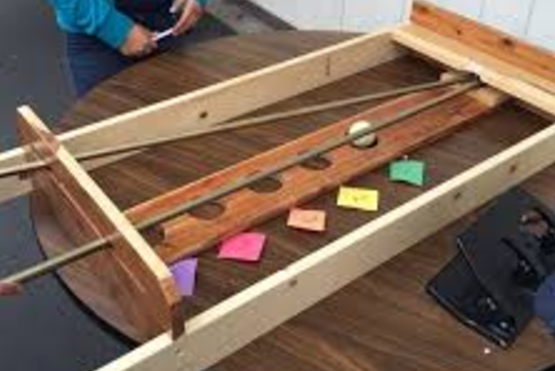 Eyelashes are a unique type of hair that grows from the edge of the eyelid to protect the eye from dust and dirt.  This is common knowledge, but our eyelashes take it a step further to help remove dust from moving towards the eye. If you’ve ever played the so called ‘anti-gravity billiard ball drop’ game you’ll understand that one can make the ball appear to roll up hill. Related to one’s eyelashes, the ball is a particle of dust while the two bars are eyelashes, and as such will help illustrate the functionality of our eyelashes for my purposes.

Unlike these bars, our eyelashes are thick near the eyelid and pointed at their tip, and as such, like the two bars that squeeze the ball to move it away from the base, the eyelashes create a wedge shape between them to help, with movement, to move dust particles away from the eye and thus away from the body.  Eyelashes, as they clump up, reinforce this wedged shape and are thus more effective in removing dust.  They are also fundamentally different than other hairs on the body like on top of one’s head, and thus are ‘designed’ to fulfill a particular function.

To reinforce this fundamental purpose, note that the upper lashes are both longer, thicker and of higher quantity than the lower lashes, since dust tends to fall from above due to gravity.

Some eyelashes are short, some long, some straight, some curled, some thick and some sparsely spaced.  What’s the difference? … the same is true for the variety of eyebrows which have different shapes, thicknesses, connectivity.

There is also the notion of eyelashes protecting one’s eyes from the sun… which I believe is of secondary functional capacity of it’s primary purpose, or perhaps a non-issue.

Before we talk about the variations of the eyelash, lets look at the eyebrows.  They are positioned over each eye and orientated towards the outside of the face.  That is, they don’t grow straight out, or point up, down or inward, but are particularly pointed in a direction that like the eyelash will move dust and dirt to the outside of the face and away from the eye.  What’s interesting about this and the eyelash, is that their design and evolution is only partly affected by Darwin’s theory of natural selection, that while exterior characteristics may be selected by partners it is the understanding that much of the human machine has selected the best design, refining it generation after generation, until we see and use what is available to us today.

Further, looking at the eyebrow and eyelash evolution one should be able to connect it to one’s environment, that is based on the above one would expect that in dusty environments these components would be more pronounced than say in a snowy environment, and that it is a pronounced brow that may provide the best argument for sun/eye protection, that the lack of such a deep brow may be connected to areas that are more likely to have diffused lighting conditions like underwater where fish have no such brow, or perhaps in Asian areas of the world.

Admittedly these are wild generalizations which are not supported by any empirical data, and do not account for the choices partners make throughout the generations of humanity, but it may be a starting point or thesis worth further examination to better understand that the way we look has nothing to do with who we are, that we are all given a vessel that more or less functions yet that vessel shouldn’t necessarily define us as who we are unless we’ve spent our entire lives being judged solely on our looks.

For me this begs the question, how does any of this relate to Architecture? Humans, like Architecture developed out of the inherent environment in which they grew, like the steep roofs of the snow covered areas would be inappropriate where rain is lacking, and like this natural evolution of architecture todays buildings should reflect where they are located.  Form follows function.

Unfortunately we are beginning to understand the simple functionality of forms and instead have replaced it with ‘a wish list’ of what we consider styles, superficially devoid of inherent usefulness which someone echoes the world wide mixing of cultures and even the alteration of how humans look.

If you haven’t figured it out by now, I believe that natural selection, that is humans picking their own partners, has but a small effect on characteristics we all have, but it is environmental forces that play a much more significant role, including the development of our internal organs, our hands, our brain and so on. The natural environment playing its part and the human (or any wildlife) responding in ways to allow them to function with less stress or difficulty.